Welcome to the National Carnival Commission of Trinidad and Tobago

It is to the barrack yard people of East Dry River and their resounding victory that day, that we owe our Carnival....... Lest we forget. Eintou Springer

The re-enactment of Kambule on Carnival Friday, this year February 28th, is symbolically the awakening of the Carnival spirit. The Kambule production recognises and celebrates the bois men and women, the warriors of the mas, who are the frontline in the confrontation with Captain Baker in the 1880s. Kambule reminds us that the Africans created a great deal despite enslavement. In the Gayelle of the existence, the ancestors fought inch by inch to clear a space for the manifestations of their culture whether remembered or forged in the crucible of the environment to which they had been so forcibly transported. The KAMBULE was rooted in the remembered masking traditions of West Africa, and of course influenced by the new Caribbean environment.

By definition, the Kambule was a torchlight procession which took place from midnight on Carnival Sunday. By the 1870s hundreds of men, carrying lighted flambeau and sticks, some drunk, most of them masked, marched around the streets of the capital. There was drumming, hooting, singing, shouting, and fights between rival bands.

But the authorities deemed it too disorderly and out of control. The bands of working-class men and women who came out were threatening to the respectable folk.  Not to mention, the lighted torches, in a town with largely wooden buildings, was a fire hazard. Thus, there seemed to be just cause for closing it down.  Various laws enacted between 1868 and 1879 gave Baker the authority to move against the marchers.  At the 1880 Kambule, he called on them to surrender their sticks, drums and torches.  Without resistance, they did as ordered.

The following year, however, the warriors and the police faced off.  Known as the Bois Bataille stick fight, bois men and women fought against the might of the British Constabulary.  The masqueraders, stickfighters came out in full force and a full-scale fight ensued—involving sticks, batons, stones and fists—in which 38 out of the 150 policemen present were injured.  The police retreated to the Barracks and remained there until Carnival Tuesday but there was no violence thereafter and the celebrations continued peacefully.

The historic battle took place on Duke Street, in the vicinity of Neal and Massy Trinidad All Stars’ pan yard and this year, like in previous years, tribute is paid to the warriorhood of the former enslaved.
Kambule 2014 is a performance crafted by the Idakeda Group, as they continue to revisit this day in our Carnival history as it commemorates the reason for our freedom and our ability to celebrate this festival. Eintou Springer, the author of this play that revels in the bravery of the men and women of the barrack yards of East Dry River, says: “In the Gayelle of the existence, the ancestors fought inch by inch to clear a space for the manifestations of their culture whether remembered or forged in the crucible of the environment to which they had been so forcibly transported.”

Within that space, it is also important to remember the genesis of the traditional mas as we know it.  For example, the Dames Lorraine charactersied by their flambouyant dresses and over-exaggerated bossoms were originally portrayed by male slaves who mimicked the wives of the plantation owners. The Jab (patois for Diable or Devil) Molassie (patois for Mélasse or Molasses) is the fearsome creature who carries a pitch fork and threatens to smear spectators unless they pay him.  But the shackles and chains that restrain him also have links to slavery.  Combined with the molasses with covers his body, the character Jab also refers to the estate gangs that dealt with cane fires.”

Deputy Chairman of the National Carnival Commission, Don Sylvester, the force behind preserving traditional mas, believes understanding Carnival begins with the Kambule. “The NCC as the Executive Producer of this performance is signalling our desire to maintain our historical connections.  I would encourage as many citizens and mas lovers as possible to witness this re-enactment,” he said. “If you want to understand where Carnival began, and where the Bat, Jab Jab and other mas characters came from, this is where to begin.”

Mr Sylvester believes that in reliving the history of Carnival, Trinidadians can keep the tradition alive amidst the colour and vibrancy for which this festival is now known.

Join us at 5am on the Piccadilly Greens, Port of Spain on Friday February 28th, 2014.
(Sources: Idakeda; Trinidad Express Feb 1, 2012; traditionalmas.com) 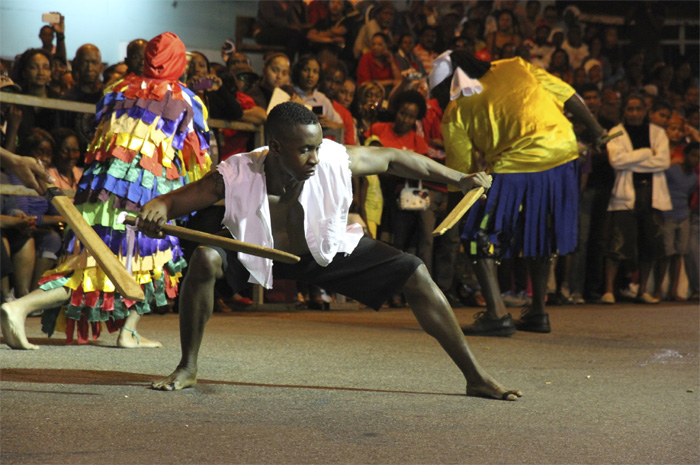 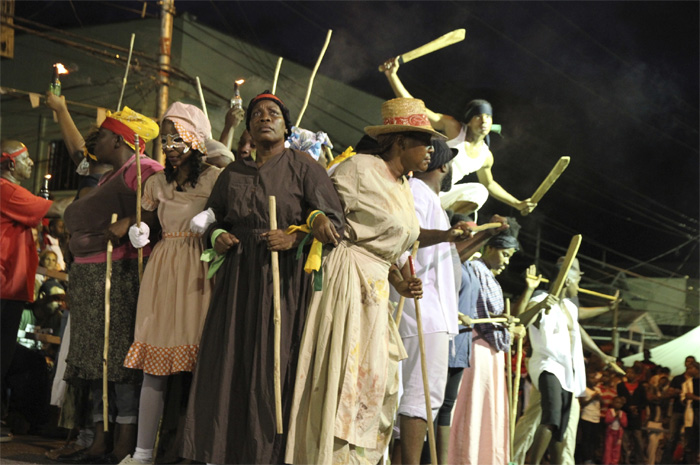 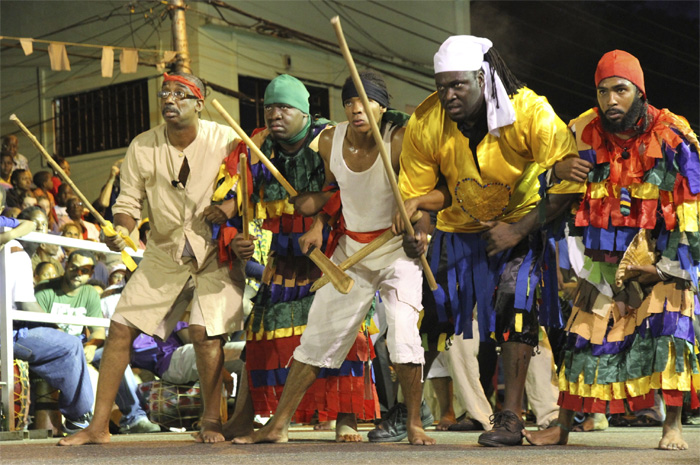 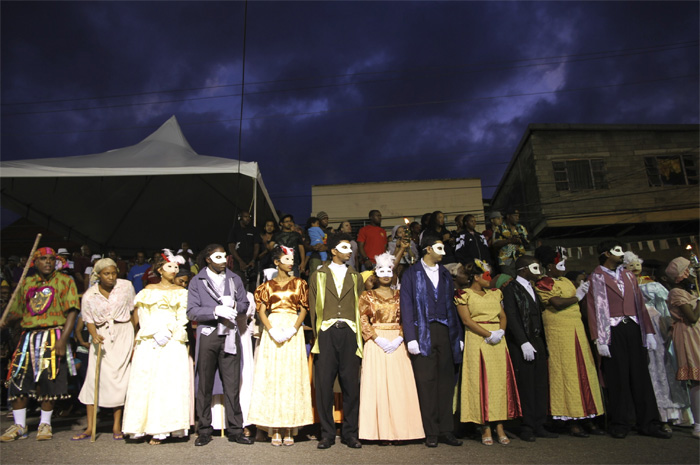 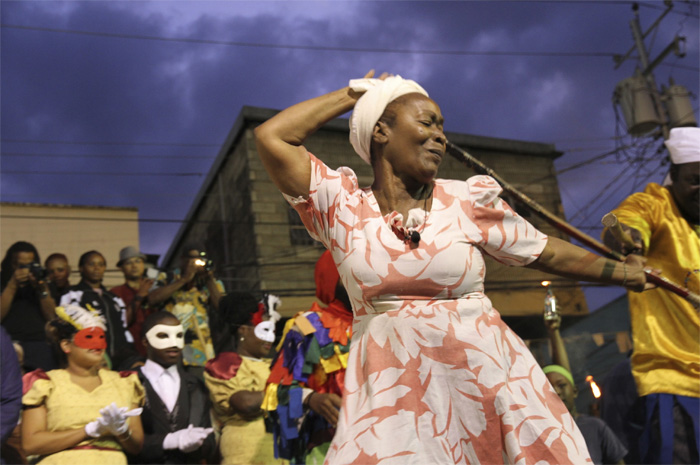 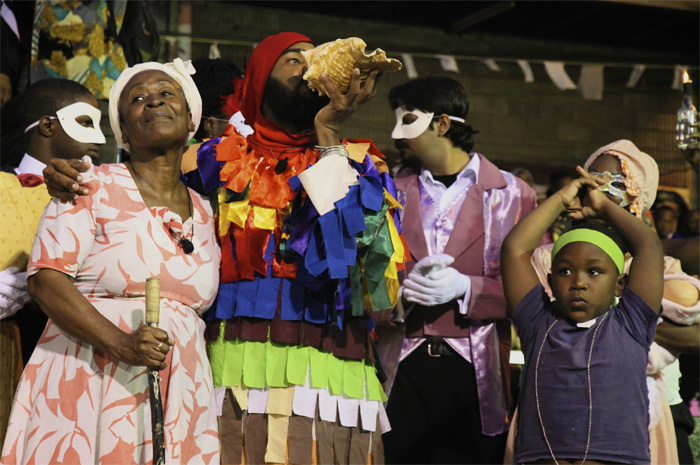 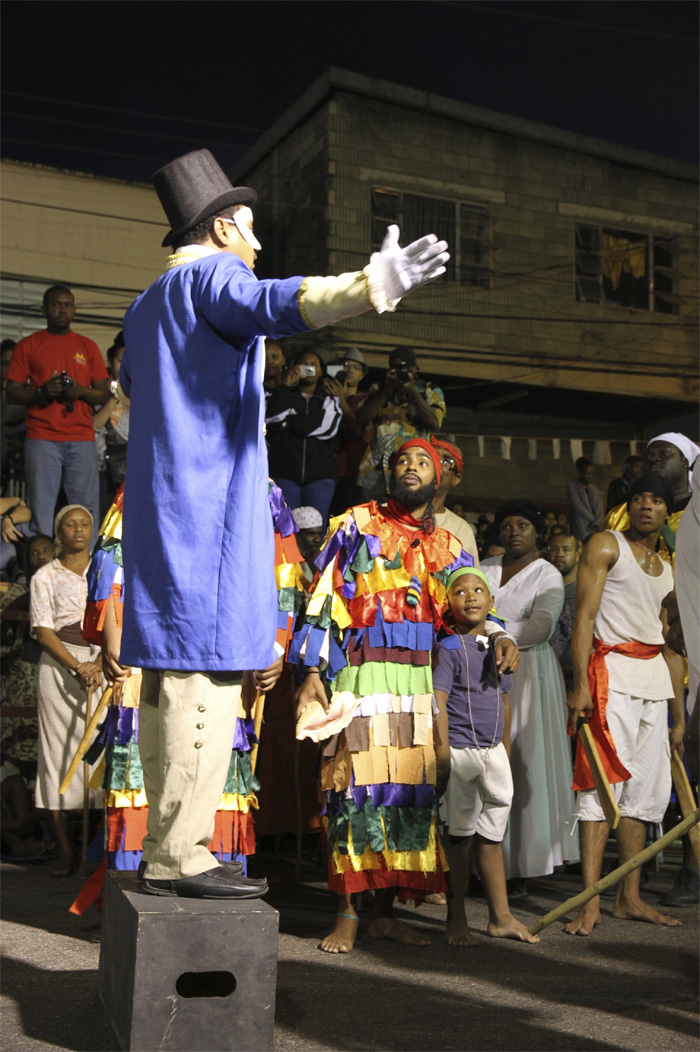 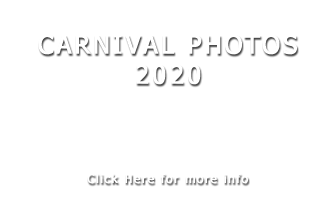